The large canvas banner measuring 2 x 3 metres hung in a sideshow located on the Glenelg foreshore from the 1950’s onwards and travelled to amusement facilities including the Royal Adelaide Show, Semaphore carnival and other venues around Australia. The banner belonged to David Plenty and Peter Raven who performed a series of magic and illusion shows with dancers. One of these performers was Betty Cain who was billed as “America’s Dancing Sensation” and is suggested to be the model for “Zorita” painted on the banner.

The sideshow banner was donated to the City of Holdfast Bay in 2007 and was displayed in the Bay Discovery Centre in Glenelg. Artlab Australia provided advice to the City of Holdfast in 2010 and presented a Preservation Needs Assessment (PNA) to the Council recommending a conservation treatment plan for the long-term preservation of the item. Artlab was invited to conduct a site visit in 2017 to view the banner and to provide a treatment proposal to preserve the banner. The project was approved and funded by a grant received from the National Library of Australia’s Community Heritage Grants Program, with additional funding from the City of Holdfast Bay.

Before donation to the Council, the banner had been stored folded for many years and the paint surface was weak with large areas of paint loss, so preliminary treatment of the banner was commenced whilst the banner was still on display. Large areas of fragile paint were stabilised as it was necessary to secure these sections to prevent further losses during the removal process from the Centre to Artlab. The banner was slung on to a roll pack and placed in a customised, lightweight folding crate, designed and built by the conservators, and transported to Artlab to begin a three-month treatment process in 2019.

Further treatment was carried out while the banner remained attached to the flattened out packing crate which was used as the work surface, permitting safe handling of the fragile item. The treatment involved a comphrensive consolidation of the entire paint film, especially to areas along the fold creases where paint loss was heavily concentrated. A general surface clean of the paint film was undertaken, repair of minor tears and holes within the fabric support, infilling on large areas of paint loss and final retouching, building the lost image and text areas.

On completion of the treatment, the banner was re-slung back on to the roll and packed in the lightweight folding crate for transport back to the Bay Discovery Centre, where the sideshow banner was re-installed in the exhibition space. Opening the custom built lightweight folding crate also used as a work surface for the banner. Removal of the banner from display onto the opened crate. Securing the banner within the crate. The work is slung under a padded roll within the lightweight crate. The crate is carefully closed and the banner is secure. The banner is packed and ready to be transported to Artlab to complete the treatment process. 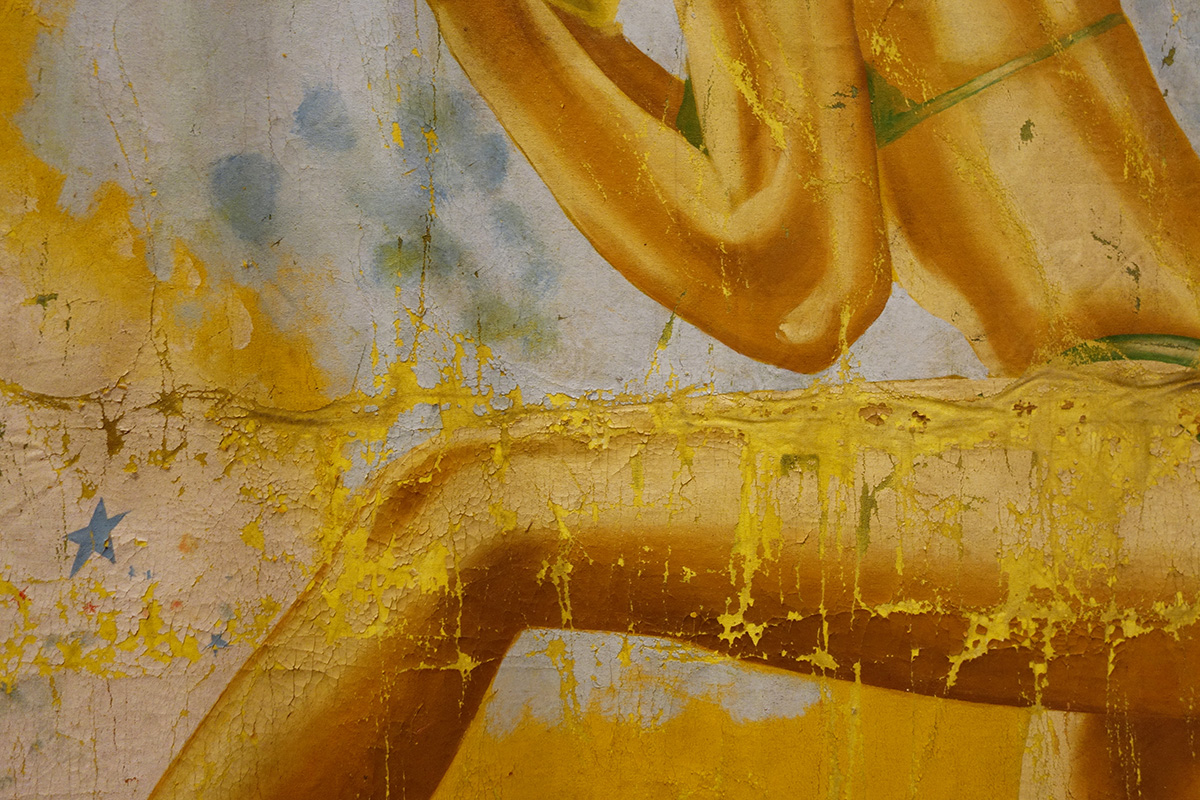 Detail of paint loss in text. Banner during treatment at Artlab Australia.